Its been over a month since I loaded up the truck with Family and hobby stuff and struck out from Southern Ontario to the Windy City Suburbs.  Having recovered sufficiently and completed my Black Library Open Submission, I figured it was time to look back at the fun that was Adepticon.  This was my second year attending but my first being there for the full week.  And boy, what a trip.

The first half of the con was very mellow, much of it spent hanging out with the family, doing some shopping and hitting the pool.  I attended the Preview event by Games Workshop which was rather enjoyable and most of that content is available elsewhere. There was an FAQ following that was typically fruitless, so I decided to ask a question that was bugging me; when is “Made to Order” coming to Forge World and old Specialist Games? Though they have done Made to Order Blood Bowl and Necromunda, I was hoping for Man O War, Epic/Space Marine, and Battlefleet Gothic.

Exhibition hall was a dangerous place.  The first time around I had my wonderful wife Lisa with me to keep in check and be an enabler at the Forge World counter.  However it didn’t stop and the loot pile continued to grow… 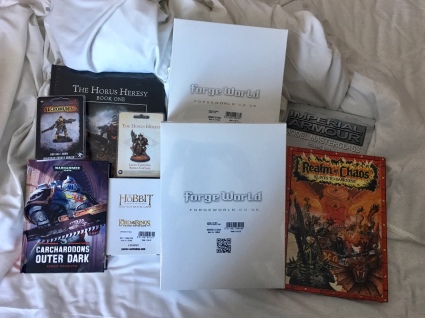 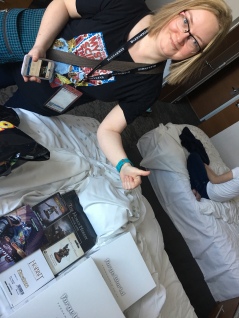 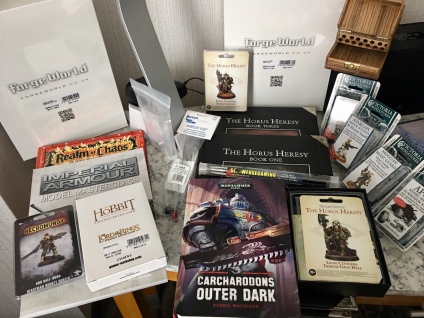 Not pictured: The starter set from Wild West Exodus and a Tablewar FATmat.

I signed up for a couple of hobby workshops.  First up was Mr. Justin’s weathering class where we went over chipping with the salt method and hairspray method, which were techniques I’ve heard of but have never knew how they worked.  The second workshop was painting black and white with Caleb and Kat of CK Studio, another excellent learning opportunity. 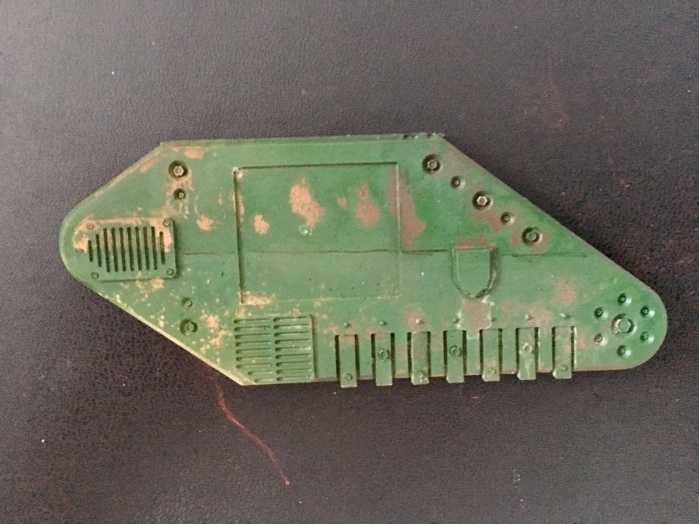 Bottom half is salt, top half is hairspray. 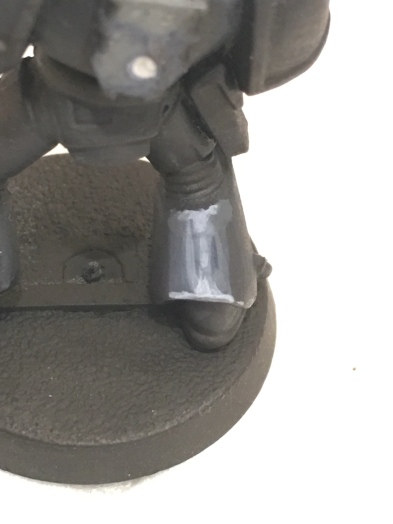 Transition on a cylinder shape.

Much of the week was spent hanging out with the family around the pool or locally.  I also had the opportunity to meet up with some of the folks who I’d met online in the community, such as Lucas (SonsofMedusa on the NPC Discord group).  First and foremost was Peter from the NGC 40K Podcast in which I was have some very enjoyable and enlightening conversations with.  Peter did much to help me solidify my own ideas for the recent Black Library submission which I completed.  To this end I also attended the “Writing for Black Library” panel which had BL authors Graham McNeil and Clint Werner to answer people’s question.  Hugely informative, that alone would be it’s own blog post so I won’t regurgitate it here.  This event was a huge pleasure as I was able to meet Graham, along with Clint and BL’s Adam Poole.  Definitely a panel I will attend again in the future.  Lastly I had the pleasure of meeting David Annandale at the Forge World area of the Exhibition hall.  I spoke briefly with him and had him sign a copy of “Warden of the Blade” which I had brought to read, not knowing he was going to be there. 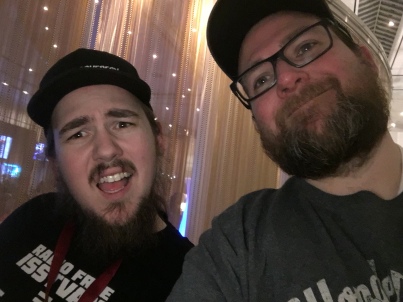 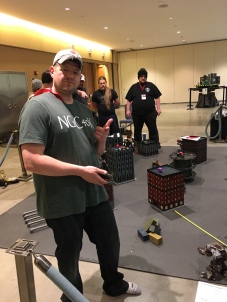 Peter of the NGC 40K podcast 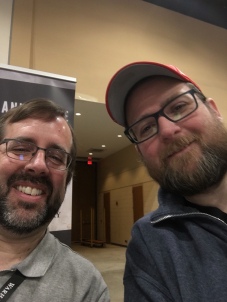 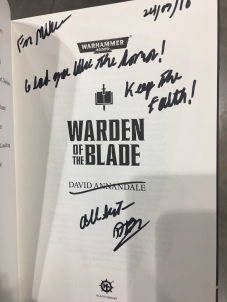 David signing my copy of “Warden of the Blade”.

As for gaming I ended up dropping out of the Combat Patrol on Saturday and but did attend a Horus Hersey Zone Mortalis event.  This was a double first for me, first Zone Mortalis and first game of Horus Hersey!  I played three excellent opponents whose name as I write this slip my mind (which I have written down in my Battle Journal at home..).  I’ll cut to the chase.  I lost all three.  Some to a poorly optimized list, which I stubbornly refused to switch, some due to poor choices, and finally some due to cheese.
Here’s my overly elite force of 500 poitns:

My first game was played on an “exterior” board being fought in an industrial area and amounted to “King of the Hill”.  My Breachers made it to the top but slowly died to a 15 man Tactical Squad of Sons of Horus while my Contemptor met his fate at the hands of Cataphrati Terminators.

My second game was against Emperor’s Children, including a Tactical Squad, a Tactical Support Squad, and a some dudes with fancy spears.  This game was really close!  The idea was to get to your opponents deployment zones.  I combat squad my Breachers and sent them up the left and right.  The left hand side was cut down by the Phoenix Guard in power armour but the right side mowed down his Tactical Support with Volkite in short order thanks to the Contemptor.  My Contemptor went charging after my oppenents other flank but the game ended on Turn 5, just shy of the Dreadnought finishing them off.  So close to victory! 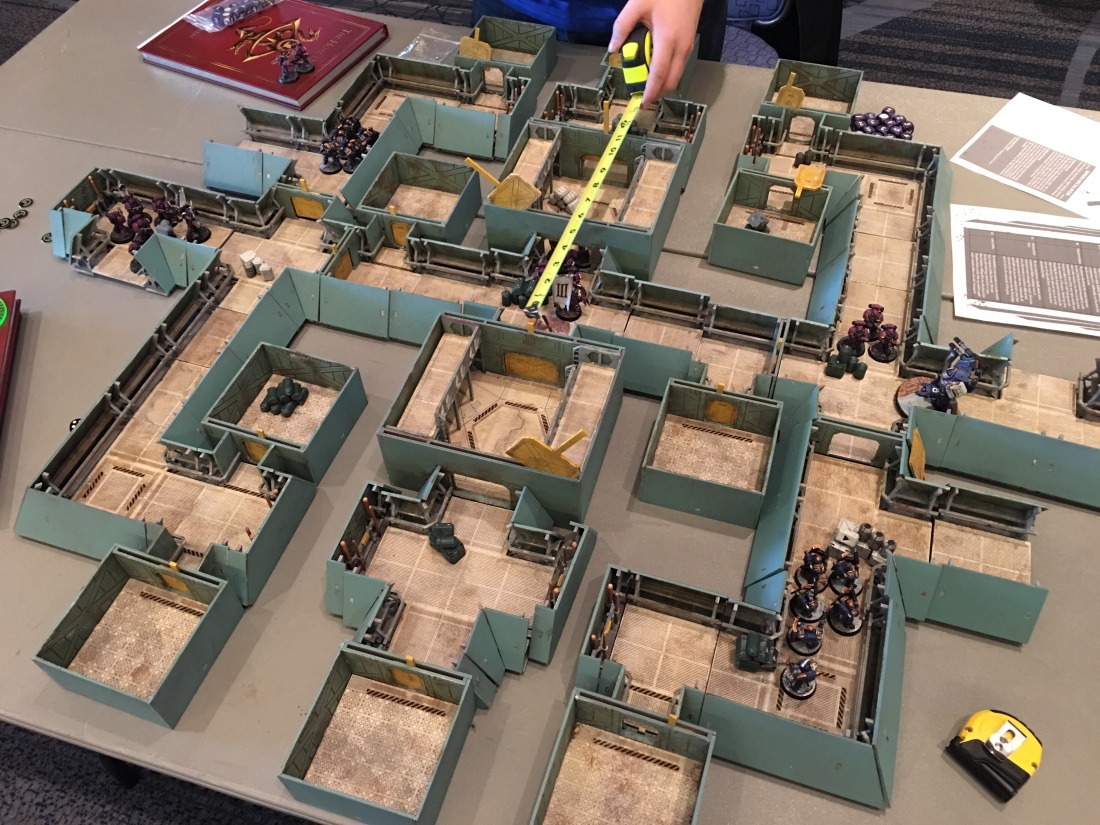 My last game was a complete wash.  My opponent was a nice guy but my luck had totally abandon me.  He had a Word Bearer force (the perfect opponent) and what looked like much like mine.  10 Man Tactical, So sort of character and a Contemptor,  one of those Mhara Gal Tainted one.  Who knew it could walk through walls?

The Mhara Gal closed quickly with my forces and so my own Contemptor moved up to intercept.  Being only 3″ away, I rolled boxcars.  They had a system in which I could re-roll a dice but that would give my opponent a re-roll which he could use whenever and would be past back and forth like such.  So this seems to be the obvious case.  So I grab one of the dice and re-rolled it.  Once again a single pip on the die face stared up to me.  I had failed a charge distance of 3″ twice.  In his following turn.  His Mhara Gal took down my own Contemptor in one round and started wading into my Breachers the following turn.  Even my Meltaguns missed.  Fate had turned against me and that game ended as quick as it began, Breachers being slaughtered wholesale by the Tainted Dreadnought. 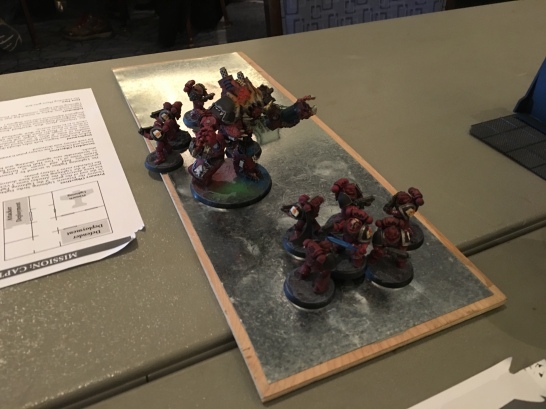 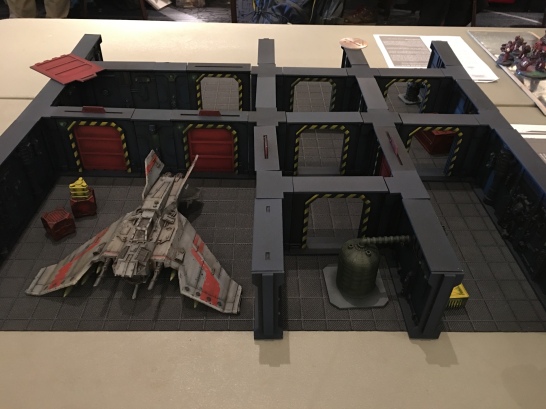 I spent the rest of the day hanging out with family.  On Sunday I got the chance to hang out with Todd and Warboss Dugg from TABLEWAR and helped them tear down their display.  I got in a game with Doug against his Ultramarines.  I looked forward to this game as a learning experience because Doug is a veteran tournament player and that is one of the weaker aspects of my own play.  We played basically Relic with the Open War deck.  I won’t get into specifics but Doug out played me combined with my historic bad luck (apparently make charges is not my thing) Doug got the relic deep into his lines and my Beta strike with my Blood Angels was blunted by his screening.  None the less, it was a pleasure playing him. 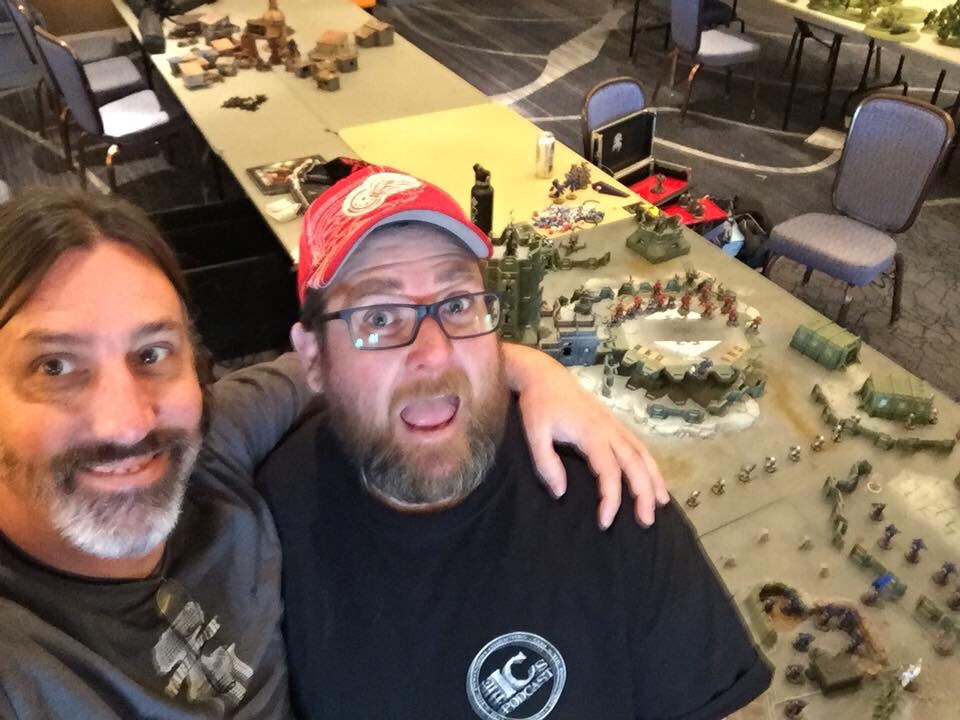 I was able to meet or see again some of the fine people of the fine people of the community, either podcasters or one of the many Facebook groups such as Carl, Adan, and Justin of Indepedent Characters, Peter of the NGC 40K, Blake and Ed of Life After the Cover Save, Chris Morgan of Forge the Narrative, Jason, Jon, and Brendan of the Sons of Heresy,  Caleb and Kat of CK Studios, Dave Gromely and Elizabeth Apke whom I know through the 1Houranight Facebook community, Scott, Kendrick, Nick, and Jarad from Upstate New York, Ted from Alaska, Tim from Appleby GW Store, and many others who’s name has slipped my mind.  This time around was a blast and I definitely plan to attend again next year.