When it comes to wargaming miniature painting, there are those who can produce much more and of much greater quality.  Even while coming up short of my goal for the “Hobby Intervention Commitment” over on the 1 Hour a Night Facebook group, am I still proud of my output.  Rather then post every single picture I took, I’ve included group shots of each project as a whole.

Technically I painted a single Veteran squad and Rhino in 2016, but this year I started the army in earnest.  I’ve completed a full third of it.  Much like many people, I ran out of gas on this project with the coming of 8th edition.  In recent months I’ve come around on wanting to get back on this horse.  Motivation has come mostly from the Sons of Hersey podcast and will continued to be fuelled by commitments I’ve made for events at Adepticon.  This year I finished a 20 Marine Tactical Squad, another Rhino, Quad Mortars, Sicaran Venerator, Scropius Whirlwind and some command models.  I still have a ton of resin sitting in the closest so there’ll be no need to purchase anything in the near future.

I have a very small force of Grey Knights which I continue to add to.  These guys were strange as I had a sudden craving to paint up a squad.  This is probably my quickest turn around ever.  From the time of purchasing the kit to being finished was about a week.  For 2018 I have a whole box set (Vanguard Strike Force I think…) to chew through.

My big project of 2016 continued to grow this year.  This army started based on the Armoured Battle Group of Imperial Armoury 1.  Though I can use the Spearhead force organization chart, the Astra Militarum’s strength now lays with its troops and strategems which require command points.  So I  will continue to work on this army going into 2018 to bring it up to battalion strength to support my numerous armoured forces.

My army of 2015 and my secret love since adolescence.  My original army was Chaos Space Marines, but these guys were the ones I faced off across the table.  I never thought the high school chum, who was the gateway for this hobby, did them justice when painting them.  I have done only slightly better.  I still have some odds and ends to add in 2018, including some Primaris Aggressors with Flamestorm gauntlets.  Because Firebats.

When people speak of piles of shame, they do not know the self-loathing as I do.  Shame at having something sitting around for a year?  Five years?  Ten years?  These are nothing.  These Berserkers have been in my possession since they first came out in 1996 with the 2nd Edition Chaos Codex.  That’s right, 21 years.  I’ve had them longer then I have not had them.  Well now they are painted, but I still feel hollow inside.  Maybe once they have tasted the blood of my enemies, that hole will fill. Or maybe I’m just hungry. Only thing I think I might add is a third squad to make a Battalion and some Terminators for Zhufor the Impaler. Is that a spear on your head? Or are you just happy to see me?  Oddly enough, I also painted Kharn which is only a year old.

With that I here’s the everything together.  I forgot to include some Terminators and a small squad of Sisters of Battle I completed. 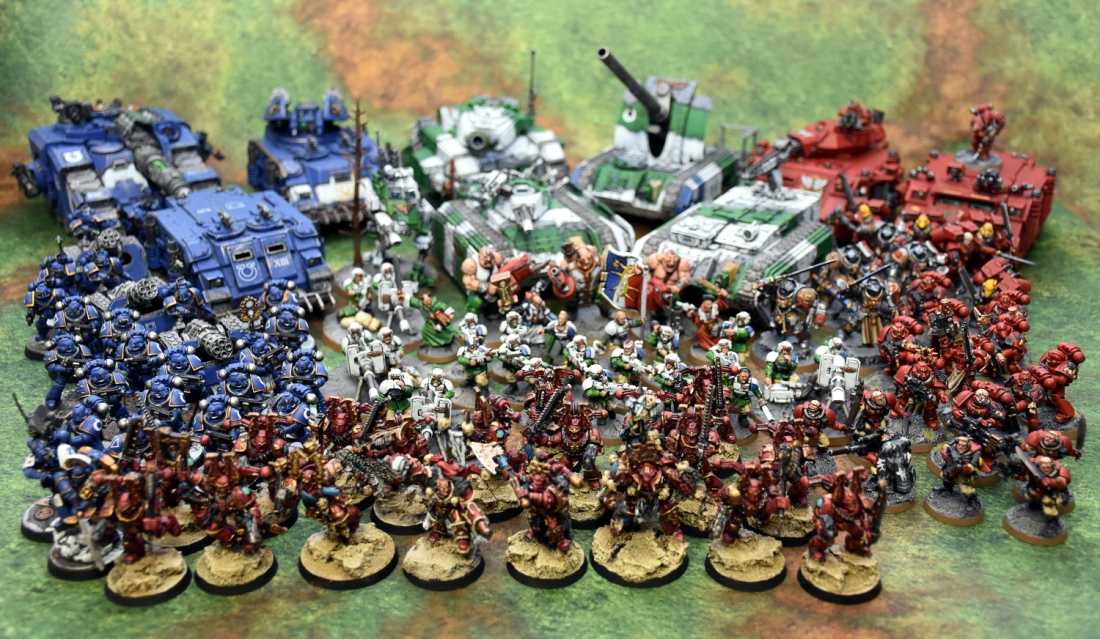 2 thoughts on “2017 Miniature Painting in Review”